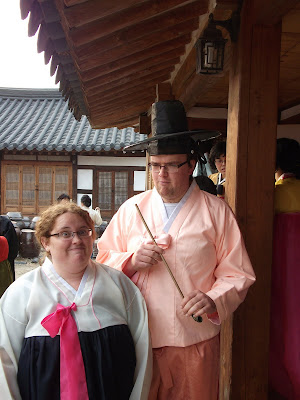 What I love about the Kblogosphere is that you can find any sorts of people living in Korea sharing their personal experience and be reminded of how great life is here. One such fun blog to read is "Karori to Korea", where you can see posts on recently eaten food and adventures that this couple goes on.

I asked, Karori to Korea, a few mind powering questions and got some lovely responses. This ExpatAbundance feature is proud to present Karori to Korea and hopes you become interested in their site, just as I have.

The Q & A:
1. The Tri-force Question: How long have you been in Korea? What's your job? Where are you from?

They have been in Korea for 9 months now. She works at two elementary schools, "used to be three and one of them had 12 students." He works at two middle schools. They are both from Wellington, New Zealand (or he is actually). She has lived there for six years but she's from Northland originally. (I suppose this is very important towards other Kiwi's.)
2. What does your blog title, "Karori to Korea" mean?
Karori is the suburb they lived in back when they were in Wellington. Quote: "...we're suckers for alliteration."
3. Name the number one most loved item in your fridge.
His most loved item is jalapeños "mmmm" and her's is Greek yogurt which was made via some powder sent from home. (Never heard of this before but does sound interesting.)
4. Is there a particular Korean food you crave now and then?
Because the temperature is getting hotter these days she is craving mul naeng myun, "love the sour/sweet broth and the chewy noodles on a stinking hot day!" He is craving bibimbop because, "his school teases him by only serving it occasionally."
5. When you feel homesick what do you do to fight the blues?
He calls his family on Skype and cooks Indian food. They live in a small town of Buan,  Jeollabukdo which doesn't have much foreign fare to offer besides the usual chicken places, so she bakes to relieve this craving. They've got a fancy toaster oven which was worth every ship-won. However, despite living in a small town they actually are surrounded by many New Zealanders whom get together and share good times.
6. What tourist attraction in Korea brought you the most pleasure / least?
She loves the weird stuff you can find in the Insadong / Jongno / Anguk area like a Chicken Museum and Ice Gallery. Also enjoyed are the great tea houses there, especially at the bottom of Ssamziegil. He got the most pleasure from the Haesingdang Park in Gangwon-do. As for the least favorite, he was not pleased with having to go back to Naesosa in Buan for EPIK training. "It's okay as temples go, but really, once was enough." Her least favorite place was the Nonsan Strawberry Festival where she discovered it to be a "giant mudpit" but lacking in strawberries. "Best thing about it was seeing a woman in a couples' outfit rocking a 6 inch heel on one foot and a moon boot on the other, traipsing around in the slop. "
7. Do you ever wear mismatched socks?
They both do and he wishes that people would stop staring at his feet and worrying about the "trivial stuff" in life and rather care about, "ramyeon with cheese and parks full of penis statues." However, he is usually disappointed when it comes to this. Personally, I know how cheap and cute socks can be in Korea, so it is no surprise to hear how much she spends on them. "Since we arrived, Anna has spent about 250K on socks and should go to rehab for addiction as she has a serious problem." 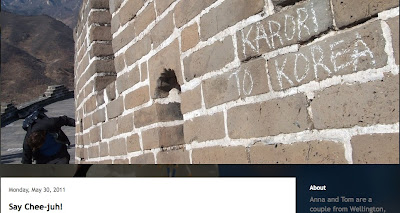 As you can see they can be a barrel-of-laughs and many posts on their blog make you smile too. Why not go over and give them a warm hello. I know if I am every passing through their neck of the woods I would love to grab a cup of tea and catch up on good times.
Posted by JIW at 5:24 PM