As we all know the internet is a place to start fires and get caught up in them. The world of the K-blogosphere is no different and perhaps, at times, thrives on drama. Recently, word got out about a CNNgo article that claimed 12 rules for expat life in Korea. Summing up our survival in terms that were generic and often a bit unsavory.


In my opinion, how one survives in Korea is based upon their own personal experience and you don't necessarily have to survive like the other expats next door. Plus, I feel we all come here for different reasons and therefore end up surviving in different ways. But if you were going to boil it down to just 12 general rules that people can live by, were the ones recommended by CNNgo valid?
Let's take a look at several key bloggers out here in Korea-land who made their own conclusions and "rules" to this little fire on the net.

1. Kiss My Kimchi: First he put some reasoning into Kyle Burton's rules and then came up with his own. I'll just give you a few of them and then you can go and check out the site for more.
2. Roboseyo: Often poignant and on the spot, Rob gives us his own 12 and some good pointers on why generalizing this kind of subject is a bad idea. Here for you are just a few of his rules, so check out his post for more.
3. DavidSWills:A blogger I have not heard of before but definitely will start checking in on. He wasn't too sure on whether the article had truth to it or not, and his objective was to examine the 12 points made in the original article. He gives some good feedback and it is worth reading.

4. Paul Ajosshi: By far the shortest and the sweetest response to this whole thing...
5. International Cat Lady: I am happy to say I found a woman blogger who commented on this topic. She mostly just remarked on the existing rules but had this to say:

My tip for expats? Use common sense. Don't do anything in Korea (or any other country for that matter) that you wouldn't do in your home country. Being overseas doesn't license you to behave like a jackass.

This makes sense no matter where you are, home or abroad to think about how your social interactions affect the world around you. Definitely, the thought that we are micro-diplomats from our countries and are representing the "foreign world" when we are in public is something to ponder. You can drink all you want here and take in the great facial creams, but do it all with some sort of grace and consciousness...ok?!

Today's "Abundance Found" is taking you around the K-blogosphere to show you random selections that are enticing to read. We will see a unique house, sheep and market food. Come with me!


1. Ajumma's Journal: In her post series, "Houses In Korea I Fell in Love With" we are greeted with architecture that is worth gushing over. In this particular post you might find one such dwelling that is familiar to some people, to figure this out go over to her post. 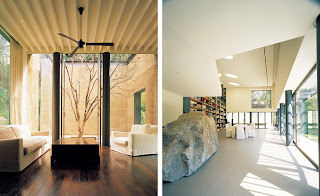 2. Discovering Korea: Bahhhhh! Who would have guessed that Korea has sheep farms. Well look no further than Discovering Korea's post on such a thing as it exists at the Daegwallyeong Sheep Ranch. Check the post for great pics and stories.

3.  One Day I'll Fly Away: Sometimes you don't have to go far to discover odd ball stuff here in Korea. Just in your neighborhood could be a market or a shop that sells something uniquely Korean. In this post we get to see what is in this blogger's neighborhood, so take a look. 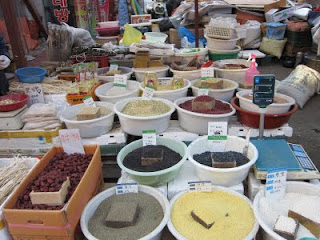 I hope this "Found" brought you closer to a blogger you didn't see before or a subject you hadn't known about.
Posted by JIW at 1:51 AM 3 comments:

Today marks another passing of Buddha's birthday here in Korea. A day for celebration and prayer amongst devotees, but also a day off for hard working Koreans and most English teachers. Whether you visit temples during this time or make your way to the Jogyesa temple near Insadong, you cannot escape life in Korea without seeing or experiencing some sort of Buddhist element. The following are a list of some Kbloggers who have taken the time to see Buddhist relics or participate in rituals personally.

1. Kiwi Wonju Blogger: In 2008 he spent some time taking a bike tour around Uljin where he encountered a cave and a famous Buddhist temple. Go over and see what fun places he found while traveling on a bike. 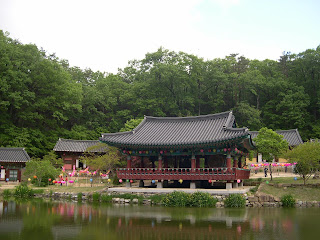 2. Coco Busan: In a post title, "Tiny Monks, Big Temple" you get a nice snapshot of the Yonggungsa Temple which has a view of the sea. For those living up here in Seoul it gives you a look of the great treasures to be found, down near Busan. Check the post out for more details.

3. Tigers and Magpies: A blog I just only discovered today, but with a plethora of temple visits. Here I chose to show you one he took to the Tongdosa Temple. In this post he shows us great temple shots and also some history. It come's highly recommended so why not go check out the post and find out for yourself.

4. Onion has a what?: Another new blog I just discovered and one that offers not just perspectives on teaching but also her ventures into Korean culture. In this featured post she talks about a temple stay and things you do while there. It definitely is honest and also a great look at this unique tourist aspect in Korea.

Whether or not you care for Buddhism seeing the relics and culture, that is here in Korea, certainly allows for one to get a broader sense of world religion. I highly recommend you check out the above posts and then end up going to a temple yourself and seeing it all in person.
Posted by JIW at 1:59 AM 1 comment:

When visiting another country you not only get to enjoy new food but also different variations of alcohol. Although I personally don't drink as much as my peers do out here, I know that one of the many pleasures they find is tasting different kinds of Korean beer. In this Abundance Yum! post I bring you a list of Kbloggers who have enjoyed or felt at odds with Korean beer.

1. Talking to Myself: A recent post that discusses experiences with Korean beer and a recent tasting of OB Golden Lager. Quote: "It's true, people here love having fun and equally love their booze. Just one thing, the beer is very poor." Check out more of the post to see the opinion piece yourself. 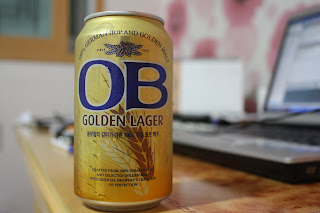 2. Paul Ajosshi: Although some might find Korean beer to really suck, there are those that find it an essential part of the Korean experience. Here, amongst Paul's "Ten Things" list he makes beer and bbq a number one hit.
3. Biz and Steve: Finding a fun beer apparatus is certainly a bonus when living abroad. Here they found an interesting dispenser for this beverage. 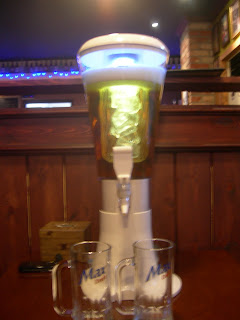 4. Xweing Away in Korea: Another find here of someone encountering an odd size pitcher of beer. 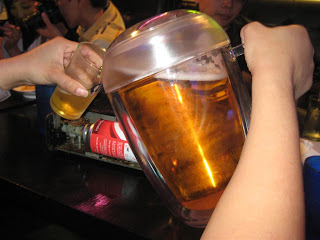 As you can see ones drinking adventures in Korea are never dull, and this is just the tip of it all. Considering that there are plenty of drinking games out there to enjoy at the many bars and hofs here in Korea.
Posted by JIW at 8:04 PM 2 comments:

There is a section of this blog titled, "News and Views." There you can find a list of bloggers who write about the more political and social aspects of life in Korea. Sometimes, when I follow these stories too much I find myself feeling down in the dumps about Korean life. But, in the end, I still get some perspective on the issues at hand.

Recently, there was buzz about the scandalous site BlackOutKorea being discovered by Koreans. BlackOutKorea is a site (now open only to those invited) where some folks posted pictures of drunken passed-out Koreans. I recall seeing this site last year and at first was amused, but quickly found myself disgusted. Not at the site of drunken Koreans but seeing foreigners posing with them and at times even touching the innocent people.

Roboseyo wrote a great evaluation of what went wrong with the site and the troubles of what happens when Korean folks discovered it. You can read it over at his site and specifically at this post. There were a few other sites that picked up on this story and gave their thoughts. Here they are:
As you can see some folks take the social aspects and talk about it seriously while others use it as a way to reinforce their personal opinions of the country.


In the end, it is up to readers to interpret this material in their own way. However, I definitely feel that it all depends on what side of the Kblogoshphere you are reading mostly. With an issue like this one and many others, I suggest getting the full spectrum.
Posted by JIW at 1:55 AM 3 comments: