It's a topic that will inevitably come up if you are planning to come to Korea or already here. That is the topic of the Korean cuisine known as boshintang (보신탕) a soup that includes dog meat. I for one have never tried this food and still can't as I just don't see myself eating dog meat. But there are other foreigners in Korea who have tried it out and lived to tell the tale. Included in today's "Abundance Thinks" are those experiences along with posters who have spent some time talking on the humane side of the subject. I hope these posts clear some questions you might have about this kind of food in Korea.

1. In My Time...: An old traveler to Korea, but had a boshintang experience. Here she gets a "pot of dog" and goes at it. Certainly she knew about the controversy but wanted to try it anyways. To hear about the taste and experience check out the post. 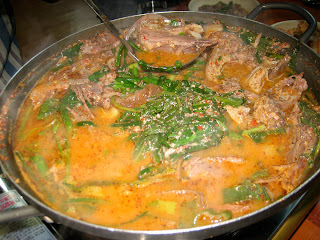 2. Hangook Summer: Here we take another person's experience, but this time he just watched his friend eat it. 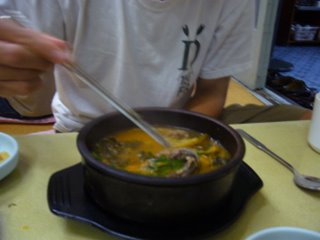 3. Roboseyo: Now let's get into the issue of raising and slaughtering dogs for meat. Rob highlights for us the animal and cultural rights that this cuisine has created. He articulately gives us an understanding from many view points and also gets you thinking about whether it is right of us to come in and try to change this aspect of Korean culture. Check out the post for a good read.

4. Karori to Korea: Generally speaking there have been times I have wondered if Korea even has an animal rights group. I've seen animals on TV programs abused and handled in awful ways. Well on this post we see that people do care and even take their angst to the streets.

The topic of eating dog meat might come up someday with your Korean counterparts at work. It might be a good idea to get an understanding of the issue from all sides before leashing out some opinions. Remember not all Korean people eat dog meat and some even don't want to. In that case, don't assume all people in Korea eat it or support the practice. I hope these posts give you insight into the taste and political aspects surrounding this kind of food.
Posted by JIW at 7:34 PM