Spring is popping it's beautiful head out so why not take another spin around the Kblogosphere? Let's see what we come up with this time...

1. Cute in Korea: A blog dedicated to the cute side of Korea, but often has so much more. Here she shows us the La Petit Prince display at Lotte Mall. More often than you would like, you run into these often cute and sometimes bizarre displays around the shopping centers in Korea.

4. Daughter of Korea: Now for something a bit lighter...a post about her favorite things..this being reststops in Korea. I for one do enjoy these places as they have their own sense of culture sometimes. 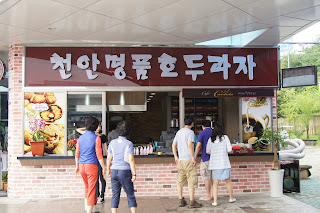 5. Bathhouse Ballads: A fun post about cell phone use in Korea by both Koreans and foreigners. Certainly fun to peruse and check mark where you are guilty in your love of your hand phone.

Another fun round of Abundance Found complete and this time, I think we went all over. Till next time...
Posted by JIW at 1:19 AM 1 comment:

You can find a convenience store on nearly every corner here in Seoul. Like most quick-stop places they offer bottled drinks, candy and of course snacks. As a new comer to this land you stare at the shelf and wonder what would be best to try. If you adventurous you'll try the one with the image of an octopus or shrimp on it. But if you are a bit timid you'll go with the usual potato chips or cookies. Today we are going to look at Korean snacks bloggers have blabbed about and see how they fare.

1. The Korea Blog: Let's start of with a list of popular choices. Shrimp chips seem to taste yummy to folks out there.

2. Zen Kimchi: Then there are the array of ice-creams one could choose from during those hot summer days. How about a peachy flavored one? I for one have tried and find it delightful.

3. The Seoul Patch: Korea has their own version of onion rings in snack form. I think I have tried these before and found them too salty. Who cares, when they come as a bonus? 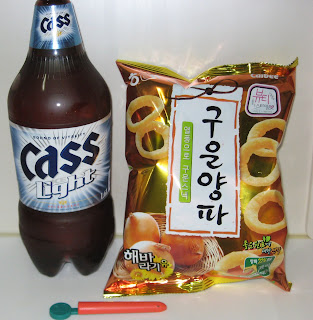 4. Paul Ajosshi: Sometimes you can be handed random snacks from friends and colleagues. Here he was given a delicious treat from Jeju.

Have any favorite snacks stacked up in your house? Let us know ~
Posted by JIW at 11:42 PM 3 comments:

There comes a point, living in Korea, when you are watching the Korean TV and see a foreign person mixed in on a regular TV program. The next thing you know they are spouting out nearly perfect Korean and you don't have a clue what they are saying. You can only hope they aren't making fools of themselves and indirectly making foreigners look like dum-dums. A lot of words have been exchanged throughout time on the Kblogosphere about foreigners in Korean media. Sometimes the imagery is good and other times it is scripted. The big issue seems to be most networks want to just book "beautiful blondes", which for some is misleading the audience. Let's take a look at several bloggers who commented about this article of interest in Korea, and also some sites that touch on the imagery.

1. Roboseyo: A nice long article about how both sides tend to portray each other in certain aspects. He makes the notion that, "Living overseas, we sometimes make the mistake of comparing Korean popular media with the very best our home cultures produce -- after all, THAT'S what we consume while we're overseas. It's hardly a fair comparison: we've got to compare SNSD with Miley Ray Cyrus, not with freaking Radiohead, and we've got to compare Misuda with Maury, not with 60 Minutes or even Oprah, or we're missing the point."

2. Drama Beans: Here we get a bigger sense of how and what the foreigner make up looks like on Korean TV (for 2009). You can see that it is mixed up, but still shows foreigners as more eye candy than essence on the programs. "The problem is, the television roles for foreigners still don’t mix in freely, and the perspective on directing foreign actors is still as the “other.” We’re still at the level where the casting of a foreign actor stimulates curiosity with viewers."

3. Global Voices Online: Then there is the case of the show "Misuda" that has a set of foreign women, dressed up nicely who chat with Korean men. From what I recall around the grape vine, it is all scripted. I for one distaste this show as I am instinctively jealous of the ladies and also how they put them on a pedestal. Here in this post you can see the issues at hand. "f the purpose is to provide chances to reflect on Korean society and culture and to learn about other cultures, how about middle aged foreign women and grandfather? How about foreign kids?" 4. Zen Kimchi: But then you get hope that wholesome involvement of foreigners in Korean media is possible. Especially when Joe from Zen Kimchi and his pals are portrayed on TV. Also Joe has worked hard with Arirang to do several series.

I for one have this advice, be careful answering video surveys on the street. You never how they can twist your words around. Anyways, if you have any thoughts on foreigners in Korean media than go ahead.
Posted by JIW at 10:50 PM 5 comments:

It's March here in Korea-land and for many of us that means a new semester of work. Also, for many that means their first day on the job. I recall my first day, four years ago, and it was a completely different experience from what I go through these days. You are not only dealing with learning the ways of your school but culture shock is still rocking your mind as well. Today, I present you some words written by folks who had a memorable first day (or week) at their job. I hope this helps show how important and groundbreaking this day can be.

1. The Seoul Patch: He's written about many first days and I liked this one because it shows how you can run into some surprises. Although, there is nothing you can do about it, that first day might come as a shocker.

"So, okay, maybe I'm not as smart as Einstein after all, but nobody told me I am at an ALL-BOYS SCHOOL! Not that it really matters, I'm just saying that seems to me a feature of a school that you might want to mention."

2. I'm No Picasso: For some seasoned teachers they might experience that first day again when they get to teach a special class or camp. Here she highlights how things can go awry that first day if the school isn't even ready for class.

"What was that about no electricity, GFBR? Yeah. Me too. Got it switched on and then moved to the new classroom to find — what’s this? — no computer! No powerpoints or photos or games."

3. My Life! Teaching in a Korean University: Here you can get a good idea of what this teacher does on her first day. A simple class indeed!

I hope those posts help you get an idea for what the first day (or week) is like on the job here in Korea.
Posted by JIW at 2:15 AM 2 comments: