Some of you might recall that at the beginning of this month you had a week or several days off from work. That was because Korea celebrated Seollal or the Lunar New Year. One of the major traditions for this is eating the soup called tteokmandu-guk or mandu rice cake soup. Although I haven't had my share of it yet, since I am still out here in America I plan to get a fresh bowl when I return. In the meantime, we can enjoy what other bloggers have to say about their experience of this yummy and satisfying soup. 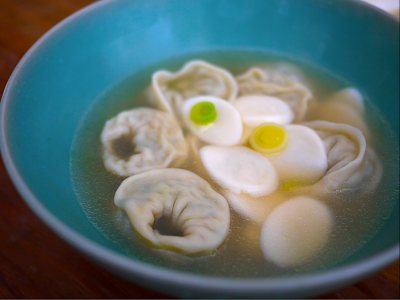 source: Seoul Eats
Yummy Explorations:
I'm hoping my boyfriend's mom will make me a fresh soup when I get back to Seoul, because these posts have my mouth watering! Anyways, if you have your own experience of this lovely soup, please do share.
Posted by JIW at 12:32 PM